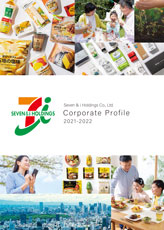 Effective Use of Resources

In response to such trends as the sharp increase in the world’s population and its continued urbanization along with the rapid economic growth of emerging and developing nations, the depletion of natural resources essential for living has become an issue. Seven & i Group is working toward achieving a circular economy that makes effective use of resources by working with customers and business partners to reduce waste, collect recyclable resources at stores, promote recycling, and reuse materials.

Collection of Recyclable Resource at Stores

Seven & i Group is promoting an important initiative to recover and recycle empty containers and other materials from its products. Every Group company cooperates with customers and local governments to collect recycling resources such as bottles, cans, polystyrene, paper cartons, and PET bottles at stores in accordance with local waste disposal sorting rules. Recently, some stores of the Group have also been cooperating with local governments to collect small electrical appliances, which have been drawing attention as “urban mines.”

Ito-Yokado, York-Benimru, and York have had reverse vending machines for collecting PET bottles for recycling installed at stores since 2012. Since PET bottles inserted into the machines undergo an automatic process of foreign-matter removal and volume-reduction (by either compression or crushing), large volumes of bottles for recycling can be sent to recycling plants on each occasion, which reduces the delivery frequency from stores. Moreover, by utilizing Seven & i Group logistics routes, more efficient transportation is possible and the volume of CO2 emissions resulting from the operations can be reduced.

As of the end of February 2021, 1,001 reverse vending machines have been installed in stores across the four companies, and approximately 8,700 tons of PET bottles have been collected. We are promoting an initiative to recycle material from PET bottles collected at stores and use it in packaging for the Group's Seven Premium private brand products. Moreover, we have printed a note explaining the process from collecting to recycling on the product packaging.

In June 2019, Seven & i Group began selling “Seven Premium Hajime Ryokucha Ichi-nichi Ippon” in recycled bottles made by using 100% of the PET bottles collected by reverse vending machines at stores. It is the first initiative of its kind in the world that recycles PET bottles collected from specific distribution groups as raw materials and sells them as a product again in the same distribution group.※

Seven & i Group is making efforts to expand the use of recycled PET materials while promoting the collection of PET bottles. In February 2020, “Seven Premium Lifestyle Body Cooler,” an underwear that utilizes PET bottles collected by PET bottle reverse vending machines installed at the Group stores and uses recycled yarn made from the PET bottles, went on sale at Ito-Yokado, York-Benimaru, and Sogo & Seibu stores nationwide.

As of February 2021, Ito-Yokado carries approximately 250 clothing items that use these recycled materials, accounting for about 12% of the sales mix for Ito-Yokado’s underwear category. We plan to continue developing products that use recycled PET bottle materials moving forward.

Reducing the Use of Disposable Plastic Bags

Seven & i Group has promoted the reduced use of disposable plastic bags by asking customers whether they need a bag at the register, displaying posters and POP signs, and holding events to encourage customers to bring their own shopping bags when shopping at stores.

Seven-Eleven Japan, with the marine plastic waste problem becoming a social issue, has recommended that 21,000 stores nationwide use plastic shopping bags containing 30% plant-derived biomass polyethylene to further reduce usage fees for petroleum-derived plastics. As plastic shopping bags started to cost money in July 2020, the turn-down rate across the entire Group has climbed to just under 80%, and the turn-down rate at Seven-Eleven Japan, which was about 30% before the charge was applied, has grown to be about 75% (as of the end of February 2021), leading to an 8,000-ton reduction in the use of plastic (amount reduced from the July 2020 start of charging to February 2021). Moreover, the “amount equivalent to Head Office revenue” from the charge of plastic shopping bags is being used widely for future generations and funding cleanup activities, such as the cost of installing PET bottle reverse vending machines at 7-Eleven stores, which has been done as an initiative to reduce our negative environmental impact, and partial donations to the Seven-Eleven Foundation.

Ito-Yokado is working to curtail the generation of waste and to promote reuse and recycling with a view to reducing waste disposal. For example, in product deliveries, Ito-Yokado utilizes reusable containers and hangers for delivery of apparel as a way of cutting down on the use of packaging and cardboard. At stores, Ito-Yokado promotes understanding of recycling, and store employees are encouraged to rigorously sort waste for recycling purposes.

Shipping work at a distribution center

Reuse of Fixtures and Building Materials from Closed Stores