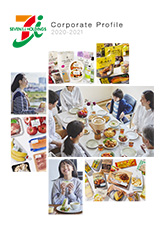 Compensation for Board of Directors and Audit & Supervisory Board Members

Introduction of a non-financial indicator from FY2021

Aiming for the balance of corporate value and social value, the Company decided to add a target to reduce the amount of CO2 emissions under the environmental declaration called『 GREEN CHALLENGE 2050』made in May 2019, as a non-financial indicator of the Key Performance Indicator (KPI) for the stock-based compensation from the fiscal year ending February 28, 2021.

Policies and procedures in determining the compensation of Directors and Audit & Supervisory Board Members [CGC Principle 3.1(iii)]

1Basic views on compensation for Directors and Audit & Supervisory Board Members

The Company considers the compensation system for Directors and Audit & Supervisory Board Members of the Company (in this Policy, “officers”) to be “an important mechanism to appropriately take risks for the sake of the continued growth of the medium- and long-term corporate value and sustainable growth of the Group, based on our basic views on corporate governance,” and builds and operates the system based on the points set forth below.

• Ensure the objectivity and transparency of the compensation decision process, and establish a compensation system trusted by all stakeholders.

• With regard to the design of a specific compensation system for officers, continue to consider tailoring it more appropriately in light of future trends in legal systems and society.

The levels of compensation for officers will be determined, taking into consideration various fundamentals in the business content and the business environment of the Company, with reference to the compensation levels of officers in major companies of the same size as the Company based on market capitalization and operating income levels, etc.

The compensation composition ratios for operating Directors (*) are as follows:

• A fixed monetary compensation commensurate with the responsibilities of each position will be paid.

• Compensation will be paid monthly during the term of office.

• Short-term incentive compensation will be a performance-based compensation that varies based on the company’s business performance and individual evaluations, etc., for the relevant fiscal year.

• Compensation will be paid annually after the company’s business performance and individual evaluations, etc., for the relevant fiscal year have been confirmed.

• The Key Performance Indicators (KPIs) for performance-based compensation (bonuses) are per the table below. While evaluating the degree of improvement of profit-making capability in the main business, for incorporating the shareholders’ viewpoint, consolidated ROE and consolidated net income are also used together as KPIs.

• Performance-based and stock-based compensation will enhance sharing profits and risks with our shareholders who have medium- and long-term perspectives by providing points during the term of office based on which shares will be delivered.

• The covered period will be four fiscal years starting from the fiscal year ended February 29, 2020.

• Shares will be delivered to Directors upon their retirement.

• Points to be granted for each fiscal year will be calculated by multiplying the standard points based on their position by a performance-based coefficient and will vary between 0% and 200% depending on the achievement level of targets, etc.

• The KPIs for stock-based compensation are per the table below. In order to incorporate medium- and long-term shareholder perspectives, consolidated ROE and consolidated EPS are used as indicators, and in order to evaluate that these can be achieved by strengthening the capability for making profit by the main business, consolidated operating income is also used together as a KPI.

• The Company, aiming for the balance of corporate value and social value, added a target to reduce the amount of CO2 emissions under the environmental declaration called 『GREEN CHALLENGE 2050』 made in May 2019, as a non-financial indicator of the KPI for stock-based compensation from the fiscal year ended February 28, 2021.

* A BIP (Board Incentive Plan) trust is an incentive plan for officers established with reference to a performance share plan and a restricted share compensation plan in the U.S.

* Formula of the performance-based coefficient:

• If an eligible Director commits a material illegal or unlawful act, no shares under this system will be delivered to such Director (malus) or the Company may request that such Director refund money corresponding to the shares delivered to him (clawback).

(2) Outside Directors and Audit & Supervisory Board Members

The compensation composition ratios for Outside Directors and Audit & Supervisory Board Members are as follows:

• Compensation will be paid monthly during the term of office.

5Compensation limit for Directors and Audit & Supervisory Board Members

Not more than ¥1 billion per year (not including employee salaries paid to Directors who serve concurrently as employees)
(Resolved at the 1st Annual Shareholders’ Meeting held on May 25, 2006)