Material Issue 4 Supporting the Active Role of Women, Youth and Seniors across the Group and in Society

Seven & i Holdings is promoting the concept of “work-life synergy,” which aims to create synergies by utilizing the perspective of a consumer in work while simultaneously leveraging the lessons of work in life. We have a range of assistance systems that exceed minimum legal requirements to enable diverse employees work with peace of mind. To make it even easier for employees to work, we are also taking steps to correct long working hours and encourage the use of paid leave.

The Seven & i Group has implemented various systems that go beyond legal minimums to enable employees, including part timers, to continue working comfortably while engaging in childcare or nursing care.

For example, at Ito-Yokado, which has around 30,000 employees, the most among the Group’s operating companies, there are childbirth and childcare programs and a family care program available for employees, both men and women, who have worked at the company for at least a year; the programs are also available to part-time employees. The programs are freely selected by individual employees, and combining a leave program with a reduced work hours plan is also possible. To allow all employees to see the programs, they are posted on the intranet, and understanding of the programs is also promoted during training for younger employees and level-specific training.

Seven-Eleven Japan began the “Spot Day Care” initiative in October 2016 to support the careers of employees with small children. At Seven-Eleven Japan, the franchise chain headquarters, holidays and the New Year vacation period, which are peak times for stores, are basically working days. However, for employees raising small children, it can be difficult to find day care on holidays, over New Year, and during other extended vacation periods, so this initiative establishes temporary day care facilities in company meeting rooms and at facilities near the Company’s business offices.

Started on a trial at four business offices, it was put into full operation starting from May 2017. As of February 28, 2019, it has been extended to all offices nationwide (33 areas). As of February 29, 2020, a total of 1,321 employees had utilized the system, with a total of 1,769 children having been cared for at these facilities. Spot Day Care was expanded to 14 Seven & i Group companies starting in May 2017, creating environments where employees can pursue their careers throughout the Group. In October 2017, two Seven Nanairo Nursery Schools opened in Ota-ku, Tokyo, and Hiroshima City. These facilities are available for use by 7- Eleven store owners, their employees, and local residents as well as Seven-Eleven Japan employees. An additional school opened in Sendai City in July 2018, and in Machida City, Tokyo and Kyoto City in June 2019, with plans to open additional schools in stages.

Ito-Yokado has introduced eight daycare facilities comprising authorized daycare centers and corporate-led nurseries as tenants in its shopping centers in Tokyo and four other prefectures. These facilities are used by employees and local residents. 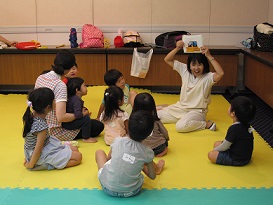 At a Spot Day Care facility 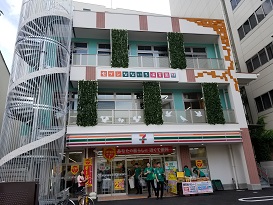 The exterior of a Seven Nanairo Nursery School

To promote greater participation by men in childcare, a childcare leave program has been introduced at Seven & i Group companies since 2014. The program provides five special vacation days per year that can be used in one-day increments to employees with pre-school aged children. Since the program was started, it has been used by many employees for various reasons involving their children, such as when their spouse gives birth, or to attend kindergarten entrance and graduation ceremonies or participate in field day events. In the fiscal year ended February 29, 2020, 44 male employees took childcare leave at Seven & i Holdings, along with 519 at Seven-Eleven Japan, and 393 at Ito-Yokado.

The Seven & i Group is also taking measures to encourage male employees to take childcare leave including producing and displaying posters targeting male managers and leave-takers. 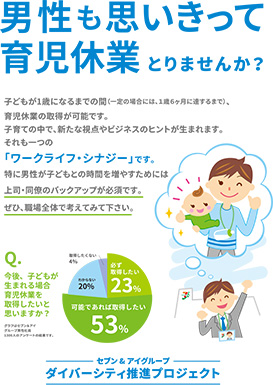 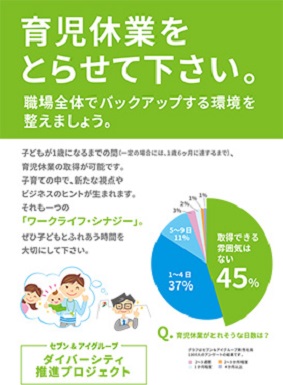 Ito-Yokado received “Platinum Kurumin” Mark certification from the Ministry of Health, Labour and Welfare as a company that supports the raising of children. “Platinum Kurumin” is awarded to companies that have already received “Kurumin” certification and have made significant progress in the use of systems to support balancing work with childcare while implementing measures at a high level. The system was established to promote continued initiatives.

In addition, Seven & i Holdings, Seven-Eleven Japan, York-Benimaru, Sogo & Seibu, Seven & i Food Systems and Seven Bank have received the “Kurumin” certification (as of February 29, 2020).

The Seven & i Group also works to help employees balance their work with family care responsibilities. A survey of family care responsibilities being provided by employees revealed that in the near future, approximately 70% of employees might have to balance work with nursing care, making this likely to become a major issue for the future. We have been regularly holding Family Care Responsibility Seminars with external experts as prior preparation for handling such responsibilities. In the fiscal year ended February 29, 2020, there were 225 participants from Group companies. In addition, we are striving to create working environments that make it easy to balance work with nursing care, including producing the Handbook for Helping Employees to Balance Work and Family Care Responsibilities with a view of using it in training and such at all Group operating companies, raising awareness about consultation help lines, and posting cases of employees balancing work with nursing care on our company newsletter.

As support for balancing work with nursing care, Seven-Eleven Japan revamped the Handbook for Balancing Work and Family Care Responsibilities in 2019. This handbook is posted on the notice board of the intranet so that it can be checked as required by all employees. Going forward, we will continue to carry out awareness-raising activities so that we can build a system that balances work with nursing care where employees properly understand knowledge about such balance.

Seven & i Holdings, Seven-Eleven Japan, Seven & i Food Systems, Seven Bank, and Nissen Holdings have telecommuting systems to make effective use of time before and after work to improve productivity and achieve work-life balance.

At the Seven & i Group, we think it is important to establish proper working environments to create comfortable workplaces. We work to restrict long working hours and raise the percentage of paid leave taken. We are introducing systems at Group companies that promote the visualization of overtime work and allow managers and employees themselves to understand the state of overtime at any time. In addition, together with promoting the review of operations at departments with a lot of overtime work and relooking of work allocation, we seek to foster a culture that looks toward improving working conditions by measures such as implement days with no overtime work and display of posters. Furthermore, the Group has set a target of achieving at least 70% for percentage of annual paid leave taken. Group companies implement initiative to encourage the taking of leave, such as encouraging employees to take long periods of leave twice each year, and visualizing the plan for taking leave.

Seven & i Holdings and Seven-Eleven Japan have implemented a system for staggered commuting times and sliding work hours since the fiscal year ended February 28, 2019 that allows employees to select their work times based on private reasons. Employees are eligible to select 8 a.m., 9 a.m., or 10 a.m. as their work start times. The aim of this is to allow employees to select their own work start time, thereby promoting active and efficient work styles.

Since February 2020, 7 a.m., 7:30 a.m., and 11 a.m. have been added as selectable work start times for the purpose of preventing the spread of COVID-19. Seven-Eleven Japan has achieved utilization results of over 80% for the staff department in particular, and this effort is leading to enhanced private time for staff as well as reduced commuting burdens.

Since 2017, Seven & i Food Systems has introduced a one-month variable working hours system that allows work to be planned according to busy and lull periods. Through the introduction of this system, the number of days of paid leave taken by full-time employees increased and the average monthly overtime work also decreased, thereby improving employees’ work-life balance.